I do not know when it will be up and running, but hopefully soon.

Shiva was put to sleep on July 8, 2011. She could not walk easily and she fell often. It turns out that she, like her pops, had a neurological disorder.

Perhaps one day I will have a new pet to write about. In the meantime please join me at my new blog, One Part Widow.

Mums is home! We snuggled all night in bed and then this morning I crawled up on her tummy and purred. It is so great to see my Mums again.

I didn't miss her so much this time, though. This time she brought in Anna, a cat sitter. Anna tried to fatten me up, so I got to eat really great food and lots of it! And I could snuggle with her on the chair at night, too - just like with Mums.

Anna was great, but Mums is Mums. I am happy that she is home again and I think Mums is happy, too.

Mums has been shutting me out of rooms and taking away my hiding places and I don't like it one little bit!! 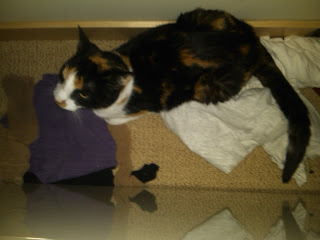 So, I asked her about this stuff that is going on. She said she needs to visit Jane and Ralph in London. Why can't Auntie Jane come here? Mums said it's because Ralphie is sick and he has doctor appointments. I say who cares. I am the important one here.

Mums did say she is going to have a friend named Anna come and stay with me while she is gone. She says Anna really likes animals. I don't care if Anna likes animals, she just has to like me.

Finally Mums said stop your whining. After all, you are the cat and I am the human. I am the one who makes the decisions around here.

Ha! Little does she know! 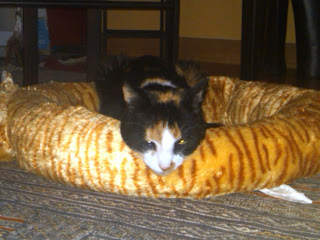 Shiva, the decision maker
Posted by Ann at 9:09 AM 3 comments:

I have been weird lately. I have been falling more than lately. And then I cry for Mums to pick me up. Sometimes she will, but sometimes she makes me do it on my own.

One day I got caught with my head under a low dresser. Mums was out of the house so I cried for hours before I was rescued.

So Mums has decided to have a house/cat sitter when she goes to visit Jane and Ralph. Really it's a kitty sitter, she doesn't worry about the condo.

I hope I like her. Anna, the sitters name, says she loves all animals and she will love me. I hope so. I do like that her name is almost like Mums. And she has a British accent like Ralph. So I guess I will at least try to like her. Maybe I will like her better than Mums! Ha! Wouldn't that teach Mums a thing about all her traveling!

This is a test. Mums has been having trouble with the blogger dropping pictures. She wants to see how long this one lasts.

Besides, I am being naughty and chewing on a blanket and Mums didn't catch me this time. So I thought I would throw this picture in before she sees it. 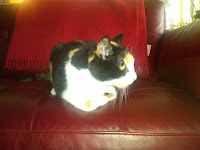 Me - In my favorite bed 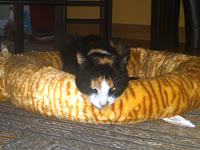